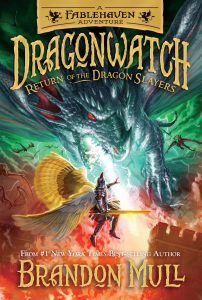 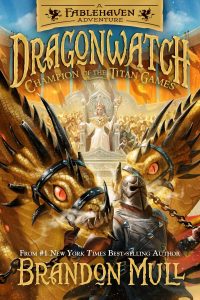 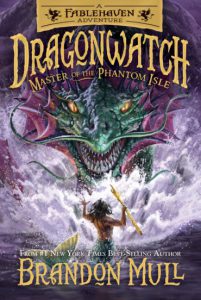 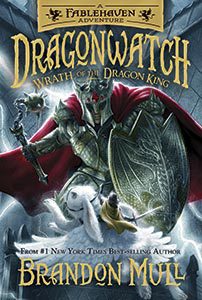 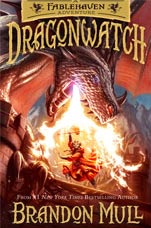 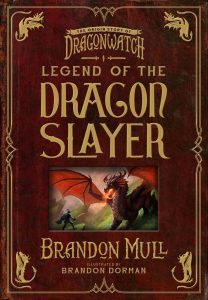 Dragonwatch 5: Return of the Dragon Slayers

The magical world teeters on the brink of collapse. The Dragon King, Celebrant, has united the dragons into a vengeful army, and only a final artifact stands in the way of them unleashing their fury against humankind. With established allegiances shifting under the strain, Seth and Kendra find themselves in desperate need of new allies.

Seth must face his most dangerous quest—the fulfillment of his pledge to the Singing Sisters. With only Calvin the Tiny Hero at his side, Seth needs to collect the pieces of the Ethergem, including the stones from the crowns of the Dragon King, the Giant Queen, and the Demon King.

Halfway across the world, Kendra finds herself torn between her duty to Dragonwatch and her desire to rescue Bracken. Can she challenge Ronodin’s control of the fairy realm without leaving the five legendary dragon slayers to be hunted by Celebrant and his sons?

Left behind at Titan Valley, Knox and Tess must survive the aftermath of the Giant Queen’s fall. Will the secret crown in Knox’s possession prove too much for him to handle?

In this fifth and final volume of Dragonwatch, our heroes make their last stand at the hidden Kingdom of Selona. For the defenders of light to stand a chance, the legendary dragon slayers must arise, lost secrets must be uncovered, and ancient powers must awaken. Get ready for the gripping, revelatory, and unforeseen conclusion to the epic ten-volume New York Times best-selling Fablehaven and Dragonwatch series.

Dragonwatch 4: Champion of the Titan Games

Who will win the battle between Dragons and Giants?

As the war with the dragons intensifies, all eyes are turning to Titan Valley for help. A dragon sanctuary unlike any of the others, this one is home to enslaved dragons ruled by the powerful Giant Queen, one of the five monarchs of the magical world. In addition, it houses the arena for the Titan Games, a series of gladiator-style battles presided over by none other than Humbuggle, the demon who stole Seth’s memories!

Seth is seeking for his memories. Kendra is seeking for Seth. And everyone is seeking to stop the dragons from taking over the world—everyone but Ronodin, the dark unicorn, who has his own devious agenda. In the monstrous battle between giants and dragons, who wins? In the race to retrieve a magical talisman that could help win the war, can Kendra trust Seth? Will they find the answers they desperately need in a realm of trolls and titans? Or are more betrayals imminent?

Dragonwatch 3: Master of the Phantom Isle

In the third book in the Dragonwatch series, Kendra leaves the timberland dragon sanctuary of Wyrmroost and travels to the other side of the world to a new and aquatic dragon preserve that teeters on the brink of being overthrown in the ongoing global dragon uprising.

The dragons have formally declared war on anyone who stands in their way of freedom and unrestrained power. With every dragon sanctuary that falls, Celebrant, the Dragon King, comes closer to his goal of world domination. No single mortal or creature can stop Celebrant. Kendra will need to raise an army of friends and allies to accomplish her mission to thwart Celebrant because her brother Seth and her closest ally, Bracken, are missing.

Cursed by the Key of Forgetting, Seth’s memories of his past—his relationships, experiences, and who he really is—are gone. For now he will align with his new mentor, Ronodin, the Dark Unicorn, who brings him to the Phantom Isle, the secret gateway to the Underworld. Though not formally a prisoner, Seth is heavily influenced by Ronodin, who wants to use him and his special Shadow Charmer powers for his own dark ends.

Seth and Kendra have braved the Fairy Queen, battled the Demon King, and survived the Dragon King during the dragon uprising. Now alone, Seth will face a new dark foe: the Underking —the ruler of the “undead”: the zombies, skeletons, and restless wraiths who tirelessly serve their dark master. He will find himself in bondage to the Underking and obligated to complete nefarious tasks for him.

Also on the Phantom Isle, but imprisoned, is Bracken, who claims to be a unicorn, the son of the Fairy Queen, and a former friend of Seth. Bracken and Kendra try to remind Seth about his past, but, unable to access his memories, he isn’t sure who to believe. For now, he will use his newly discovered magical abilities, which could be a game changer in helping Ronodin create chaos.

In this new fantasy adventure, Dragonwatch: Master of the Phantom Isle, readers travel to a ghost island, a mermaid city, and a dangerous archipelago as they meet new fantastical characters and get reintroduced to old friends from Fablehaven. As power shifts back and forth from the forces of light and dark, who will gain the ultimate advantage to win the epic dragon war?

Dragonwatch: Wrath of the Dragon King

The dragons have declared war on humans. Two of the seven dragon sanctuaries have already fallen. Will Wyrmroost be next?

After a humiliating defeat at the hands of Kendra and Seth, Celebrant, King of Dragons, prepares to unleash his fury and take control of his native preserve. Armed with information from a new ally—Ronodin, the dark unicorn—Celebrant seeks a legendary talisman—the wizenstone.

However, the powerful stone is protected by a cursed castle. Can Kendra and Seth foil Celebrant’s plan and beat him to his prize? Will the two young caretakers rally enough support from the creatures of Wyrmroost against the greatest threat the magical community has faced in ages? One thing is for certain. Dragons are wicked smart. It will take more than Kendra, Seth, and their current allies to outwit and outmatch the wrath of the Dragon King.

In the long-awaited sequel to Fablehaven, the dragons who have been kept at the dragon sanctuaries no longer consider them safe havens, but prisons, and they want their freedom. The dragons are no longer our allies….

In the hidden dragon sanctuary of Wyrmroost, Celebrant the Just, King of the Dragons, plots his revenge. He has long seen the sanctuaries as prisons, and he wants nothing more than to overthrow his captors and return the world to the Age of Dragons, when he and his kind ruled and reigned without borders. The time has come to break free and reclaim his power.

No one person is capable of stopping Celebrant and his dragon horde. It will take the ancient order of Dragonwatch to gather again if there is any chance of saving the world from destruction. In ancient times, Dragonwatch was a group of wizards, enchantresses, dragon slayers, and others who originally confined the majority of dragons into sanctuaries. But nearly all of the original Dragonwatch members are gone, and so the wizard Agad reaches out to Grandpa Sorenson for help.

As Kendra and Seth confront this new danger, they must draw upon all their skills, talents, and knowledge as only they have the ability to function together as a powerful dragon tamer. Together they must battle against forces with superior supernatural powers and breathtaking magical abilities.

How will the epic dragon showdown end? Will dragons overthrow humans and change the world as we know it?

What Critics Are Saying

"Fans of Mull's popular Fablehaven books will be delighted with this rousing opener to a new sequel series, which builds upon familiar characters and plot points from the original fantasy series...The excitement of the adventure will sweep up existing fans and undoubtedly create new ones."
—Booklist

"Dragonwatch is the first follow-up volume to Brandon Mull’s best-selling Fablehaven series. Siblings Kendra and Seth Sorenson live with their grandparents on a farm in Connecticut, but theirs is no ordinary pastoral life. Ever since they first drank milk from Viola the magic cow, Kendra and Seth have been able to see the fairy world. Their days are filled with enchanted swords, naiads, and unicorns; they see satyrs and ogres where their mortal cousins see only goats and bears. And that’s not to mention the restless dragons being guarded at Wyrmroost, and the vengeful demons—roundly defeated at Zzyzk, the battle where Kendra killed the demon king...Mull sets up an intriguing contrast between the humdrum real world and the exhilarating fairy world Kendra and Seth experience. That mixture of the familiar and the unknown will intrigue young readers with a fondness for Tolkien’s Middle-earth. The dialogue and descriptive prose shine too: 'The stars were fading. A light wind ruffled the sequoias.' With dragons on the loose and key characters missing, there’s plenty of scope for sequels."
—Foreword Reviews

"After narrowly averting a demon apocalypse in the previous series, Fablehaven sibs Seth and Kendra face a new threat to the world. The dragons are now hot to break out of their own long confinement, and a hidden talisman is all that can restore the mysteriously weakened magic barriers that have kept them in check...With help from Calvin, a gigantic (i.e., thumb-sized) nipsie, and other motley allies, the young heroes survive hazards ranging from slavering dire bears to the clinically depressed Somber Knight to find the talisman and sneak it past a draconic blockade…only to learn that dragonkind is in general revolt and other sanctuaries have already fallen. Fans of the series will welcome a new story arc stocked with familiar characters, settings, and adventures."
—Kirkus 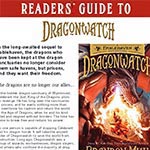 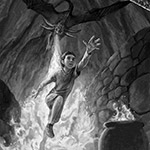 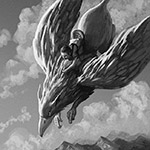 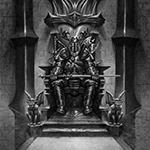 Legend of the Dragon Slayer: The Origin Story of Dragonwatch

The beautifully illustrated edition of the origin story of Dragonwatch, the #1 New York Times best-selling series, is an extraordinary collaboration between writer Brandon Mull and series illustrator Brandon Dorman. This exclusive volume also features a never-before-published dragon slayer genealogy, a detailed map of the Kingdom of Selona, and more than fifty full-color illustrations.

In ancient times dragons were the ultimate threat to the rest of the mythical world. At the height of the Age of Dragons, it appeared that dragons might not only gain dominion over the magical-races, but could potentially overrun the nonmagical world as well.