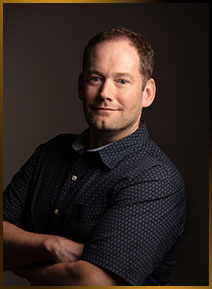 Brandon on Tour Meet Brandon Brandon Mull Trivia Contact
Brandon Mull is the #1 New York Times best-selling author of the Fablehaven, Beyonders, and Five Kingdoms series. A kinetic thinker, Brandon enjoys bouncy balls, squeezable stress toys, and popping bubble wrap. He lives in Utah in a happy little valley near the mouth of a canyon with his four children and a dog named Buffy the Vampire Slayer. Brandon loves meeting his readers and hearing about their experiences with his books.

Why Dragonwatch? And how many books will be in this new series?

I have pondered for years how to bring the characters of Fablehaven back to life in a new series. In 2006, Fablehaven was my first published novel. I finished the series by completing the fifth book in 2010, and mentioned at the back of the book that I would not write a sixth volume. I did, however, express hope I would one day create a sequel series.

That day has arrived!

The idea for Dragonwatch evolved over the past few years, and it eventually became a story I had to share. This story is the first installment of a five-book series. I will do my best to write a new book each year until I am done.

If you enjoyed Dragonwatch and haven’t read the previous Fablehaven books, I encourage you to dive into them. You’ll learn a lot more about Kendra and Seth, their friends and family, and the enchanted preserves they protect, and you’ll get to experience a bunch of fun adventures.

I can’t wait to bring readers more books in the Dragonwatch series. If you think the books are fun, spread the word to others who might enjoy them!

I often kept the desire secret, because I knew that succeeding as a novelist would be a challenge, and I didn’t want people worrying about me or thinking I was crazy. As a kid, I lived in my head a lot, making up adventures, and sometimes sharing my imaginary games with siblings and friends. For as long as I can remember, I’ve always spent a huge portion of my free time daydreaming and making up stories. As I aged, those stories became more elaborate and compelling, and I decided that I wanted to share them with others. That was when I became serious about writing.

so through high school and college I mostly practiced by writing short fiction. After graduating from Brigham Young University in 2000, I started working on my first full-length novel. It was rejected by many agents and publishers before an editor at Shadow Mountain Publishing found promise in it. Shadow Mountain did not purchase that first book, but they asked to see something else, and the book I wrote for them was Fablehaven. So Fablehaven was published by the first publisher who saw it, after I did a lot of work shopping around that first book.

with how quickly it found an audience. It seemed that wherever the book got a start, good word of mouth followed, and soon I had a career. I had been working writing marketing copy to pay the bills, but was able to quit my day job about six months after the first Fablehaven was published. By then I had already written the sequel to Fablehaven, so I started on The Candy Shop War, since my publisher didn’t want more than one Fablehaven title per year.

I am now contentedly living my dream. Between writing and promoting, I work more hours in a week than I ever have, but I am passionate about the work. I love my family a ton, and I am relieved to be able to do a job I adore.

Beyonders is the reason I became an author

The idea for Beyonders has been cooking in my mind for more than ten years. The desire to create this story is what lured me into writing novels. In Beyonders our main characters leave this world and cross into a fantasy world called Lyrian. To help the new world feel different from our own, I created some original fantasy races. It was important to me that these races weren’t breeds we were familiar with from our own mythologies. One race is called the Amar Kabal. They have seeds at the base of their skulls. If they’re killed and their seeds are planted, their bodies can regrow and live again, with the seeds preserving their memories. That is just one example.

Beyonders is a story about heroes. The emperor Maldor has systematically been buying off or breaking the heroes of Lyrian, so there are almost none left at the start of the story. Most who remain have given up or are damaged in some way. We have a boy and a girl from our world who are learning to be heroes, and at the same time we have some of these broken heroes coming out of retirement. One of my favorite characters is the Blind King, who used to be the greatest swordsman in Lyrian until the emperor took his sight.

The three Beyonders books are now written. I think the first tells a fun story and introduces the reader to the world of Lyrian and many of the characters we’ll be following. But readers won’t really know where the story is headed until the second installment. Then I’m confident that the third book is the best I have written so far. I’m very eager to see what readers think!