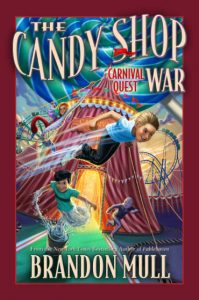 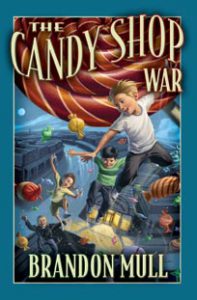 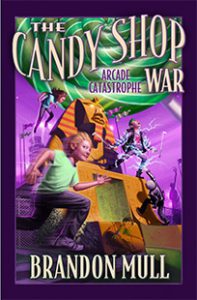 The Blue Falcons is a secret kid’s club that fights against a family of villainous magicians. Using an impressive arsenal of magical candy—including Moon Rocks, which allows someone to jump super high, and Ironhides that make someone nearly invulnerable—Nate, Summer, Trevor, and Pigeon defeated Belinda White, a sinister candy shop owner who almost seized control of their town, and her brother, Jonas White, a maniacal arcade operator who tried to turn the planet into his personal puppet.

Now, the Blue Falcons must battle the third sibling—Camilla, who has brought the Dreams and Screams International Carnival to their town of Colson, California.

Rumors are spreading about the new carnival. Those who visit feel compelled to return. Some who enter the labyrinthine Funhouse disappear for days. And the Big Top is said to bewitch audience members.

The Blue Falcons think they know who is responsible and are ready to fight, but the carnival forbids outside magic. Without their favorite enchanted treats, how can they salvage their sixth-grade year, rescue their families, and save their town?

When nightmares and weird dreams start to plague everyone who has visited the carnival, the worlds of magic and reality are both endangered. With the help of a new magical enforcer, the Blue Falcons will need to learn to use the magic of the carnival against itself, including a host of new magical carnival candies, and tap into the power of their own dreams to battle their greatest adversary yet.

What if there were a place where you could get magical candy? Moon rocks that made you feel weightless. Jawbreakers that made you unbreakable. Or candy that gave animals temporary human intelligence and communication skills. (Imagine what your pet would say!)

Four young friends, Nate, Summer, Trevor, and Pigeon, are befriended by Belinda White, the owner of a new candy shop on Main Street. However, the gray-haired, grandmotherly Mrs. White is not an ordinary candy maker. Her confections have magical side effects.

Purposefully, she invites the kids on a special mission to retrieve a hidden talisman under Mt. Diablo Elementary School. However, Mrs. White is not the only magician in town in search of the ancient artifact rumored to be a fountain of youth. She is aware that Mr. Stott, the not-so-ordinary ice cream truck driver, has a few tricks of his own.

Something fishy is going on at the new amusement center in Walnut Hills. The trouble seems linked to the mysterious disappearance of Mozag and John Dart, who have spent their lives policing the magical community. When Nate and his friends are asked to help investigate, they discover kids feverishly playing arcade games in an effort to win enough tickets to redeem one of four stamps: jets, tanks, submarines, and racecars.

Rumor has it that the stamps are definitely worth it. But what do they do?

The kids soon discover that the owner of Arcadeland is recruiting members for four different clubs. When each club is filled, he will begin his quest to retrieve a magical talisman of almost unimaginable power. With John Dart and Mozag sidelined, will Nate, Summer, Trevor, Pigeon, and their new friend, Lindy, find a way to save the day? Find out in this sweetest adventure ever!